No, I am not suffering from Spiti mania. But I would not be doing justice to this wonderful trip I made if I fail to acknowledge a few things, which made it all the more exciting. I can go to the point of saying that these were a bunch, which helped make this journey happen.

1) The Book: Quite literally, this one was the source. Its so comprehensively written and so easy to understand that I could visualize places and roads just by reading stuff from it.
“Ready Reckoner for Baspa Kinnaur Spiti and Lahaul Valleys: Motorist and Trekkers Guide with Map” by Nest & Wings is according to me a must have if one plans a trip to these places.

Sandy and I used to spend hours going through the map and details about places we had to visit the next day, every evening. Especially the map. It’s a neat road map of Himachal with distances, altitudes and treks marked. Again, a must have for the trip.

2) The BRO / HPPWD: Commendable, unmatched and at some places almost impossible. That is the story of the roads we traveled on. Border Roads Organization should have been featured on ‘Megastructures’ long back. Though having a road here is a national necessity owing to the fact that this place is strikingly close to parts of china, but still one cannot help but applaud the work that these guys do. The road is impeccable, its one of the best-maintained roads in the country in a remote rural setting. After branching off from the legendary ‘Hindustan Tibet marg’, we went to ride on the state highway 30. HPPWD is not far behind, they have done a great job despite of the fact that they are not ‘BRO’.
Thanks to both the organizations, it was such a pleasure riding a two-wheeler at + 10000 ft for 7 days. 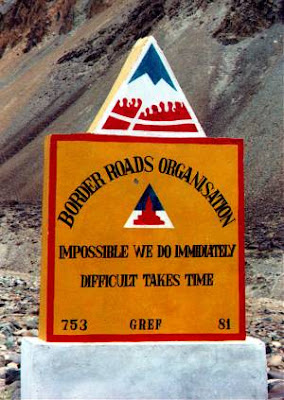 3) The Pulsars: I have heard “real bikers ride the Enfield”. May be I am not a real biker but I love my Pulsar. And frankly I can’t ride an Enfield, the last time I tried; I almost killed myself, that too in front of a bunch of girls. I think Pulsars are much better suited for this kind of a trip. Although they are low on power compared to the big 350 cc beast, the handling and superb maneuverability makes up for that loss. I was very clear that if I was doing this trip, it had to be a self-drive one, not like all those pseudo enthusiasts who sleep in the comforts of a cab till they reach a destination and take their cameras out. Bikes added an almost adventurous ingredient to the process. And, by God, did the Pulsars behave?? Oh, yeah!! They very well did, 1600 kms, 2 high passes, almost 100 kms of very bad to no roads and no punctures. Not even a small hiccup. And to top all that, I just spent a paltry sum of Rs 1300 on fuel. Pulsars Rock.

4) The Drawers: Yes, you read it right. Special thanks also go to the ‘old fashioned’ rather medieval men’s underwear. For?? For saving us all those painful hours on the hard motorbike seat. We did not realize the importance of this almost forgotten accessory until our butts were so sore from that little elastic which the ‘modern’ versions have, that we could not even walk properly. For 3 days riding the bike over bouncy roads made us make frequent stops ‘to adjust’ that elastic much like the manner Sachin Tendulkar does while batting. The problem was, even in Spiti, where the life style of people conspicuously reminds one of medieval ages, finding the old fashioned drawers was a pain (though much more bearable than the one we were already experiencing). So in Kaza we finally found them, in a dark hole-in-the-wall kind of a shop. It was funny wearing them, but the comfort was oh so satisfying. Rest of the trip was just a song,
Highly recommended for all bikers.