"What doesn’t kill you, makes you stronger"

Thankfully came the morning, though after getting all those blankets and confidence boosting assurances we didn’t worry at all. Clicked some pics of the mighty Chandratal and the surroundings, now covered with snow. 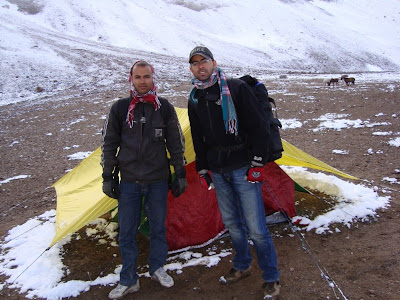 Our tent at Chandratal 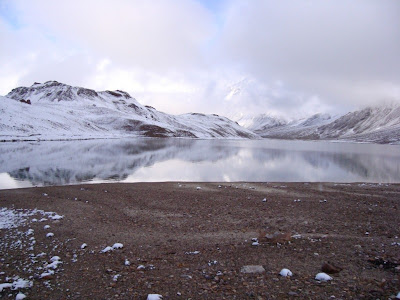 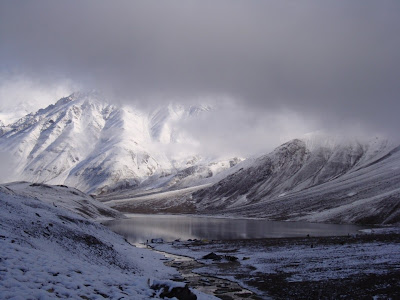 Chandratal from a Distance

Heartily thanked God for saving us. After a cup of hot tea at the Dhaba wala’s tent, we set off on the 8 km walk back to the place we parked our bikes. It had snowed for the first time in 10 years in June at Chandratal, we were contemplating whether to call ourselves lucky or otherwise. The Dhaba wala did not charge us for anything, that made us even more thankful of his efforts. After thanking him profusely we left.
We reached the bikes, after a good one and a half hour of walk, mind you, one cannot walk fast there, its almost 4300 meters and the air is very thin.
Set off for Battal, 4 kms away, the place that has just 2 dhabas and no settlement. Had a breakfast of Paranthas, which tasted like heaven especially after last nights endeavors. The snowy mountains started getting more closer to us and the wind more chilly. The road now turned to worse, actually there was no road, we were riding on gravel and through gushing streams of water. Gramphoo was planned as the next stop, where we expected the road to be better and where we enter the civilization again. It was a good 51 kms from Battal and the growing wind velocity and traces of dark clouds on the sky didn’t help. 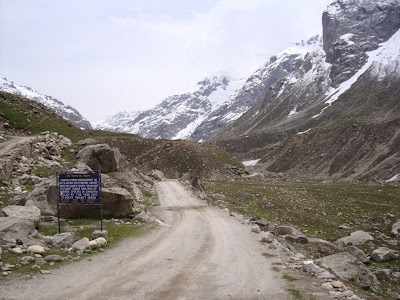 We kept going and going, managing just 10 kms or so per hour. About 5 kms before Gramphoo, the downpour started, we reached there and parked ourselves in a roadside tea shop, waiting for the rain to stop. It didn’t for about 2 hours. Rohtang pass is just 15 kms from here and we hear the chatter from some folks that it has just been closed. Freak, our luck was not getting any better. After 3 rounds of tea and a hot maggi, the weather smiled a bit on us, and so did the BRO. Rohtang was open and we didn’t waste anytime getting on our bikes. The sheer horror of having to spend another night this side of the pass was enough to get us going. The road was the baddest I had ever encountered. Running streams, deep puddles of icy, muddy water, 2 feet snow on both sides and heavy traffic coming towards you, it took us 90 minutes to do the 15 km stretch. We were the only ones who crossed Rohtang into Manali that day, it was shut down for 15 hours after we crossed, it had snowed there in June after 11 years. We were extremely lucky to get through. It was hellishly cold and heavy wind blowing, the idea of getting some pics clicked on the summit never even occurred to us. We kept going towards Manali, encountered countless landslides and it took us another 90 minutes to do the 15 kms to Marhi. After 2 rain stops and 2 hours we reached Manali. It was still raining but we decided to continue to Kullu, which was dry. Reached Kullu at 08:30 in the night, after a long and tiring ride. Had a big home cooked dinner, a long hot bath and crashed.
Posted by Unknown at 3:01 AM