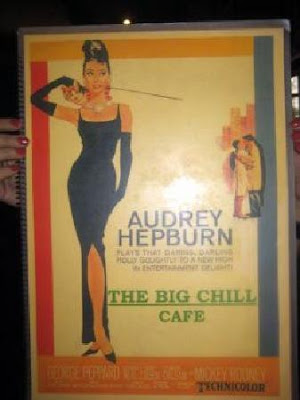 Sunday was a gastronome’s field day. After a late morning breakfast of Aalu ka Parathas (what else on a Sunday), headed to Eatopia at the IHC, for some good lunch. The place was buzzing as always, seems people in this part of Delhi do not usually cook on Sundays as the place is always packed and finding a place to sit is difficult.
I had my order decided well in advance, Kadi – Chawal, Rajma – Chawal. Tinki and Kanav complied. Order was placed and we started checking the people out (watching people eat is the world’s best known appetizer and we surely had huge portions).
Food was amazingly spicy as always and I loved it, the round was complete with a Chocolate Tiramisu.
I dragged myself out of the place (literally) and was unable to walk straight, my belly protruding and the belt on my jeans protesting. Drove for another 1 hour or so, before heading to our next destination, again to have something to eat.

Café Big Chill is located in the Posh, Expat frequented Khan Market. It was my first time to the area and Man, was I impressed?
The place was a welcome breather from the general hoopla of the city Malls and thankfully the number of pretty faces around was statistically more significant. Big Chill was located in a quaint gully, and looked quite unassuming, only from the outside.
The place was as happening from the inside as the legend said it would be, the walls were covered with posters of yesteryear’s Hollywood blockbusters with special emphasis on Audrey Hepburn.
The most spoken about thick shakes were ordered in every variety, whose name sounded yummy, and yummy they were. Shakes were slurped off in matter of minutes before we smelled and the café guy confirmed that they also contained raw eggs. The damage had already been done. We moved on to other stuff on the huge menu card before the guilt had set in. The Lebanese mini mezze was great, a good healthy alternative to anything else on the menu card. Big chill impressed me, especially the kind of crowd there, would surely return (and would make sure I don’t eat before I head there).
Took a complete round of the Khan market after that and spotted vehicles of every luxury and sports make that I had every heard off. More embarrassing was the fact that the parking guy had to move atleast 5 luxury cars (3 of them in the 50 lakh plus bracket), so that I could move my 3 year old Indica out of there.


Would come back soon, preferably at Rush hour time ;)