Started early from Kaza, after a round in the market for food provisions and stuff we could need while camping in the Chandratal meadows. The roads towards Kunzam was good, we could see the Kye monastery from the road till a good while. The snowy mountains were coming nearer and nearer. 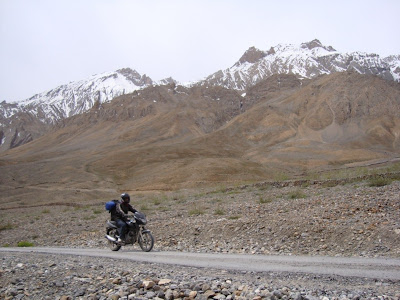 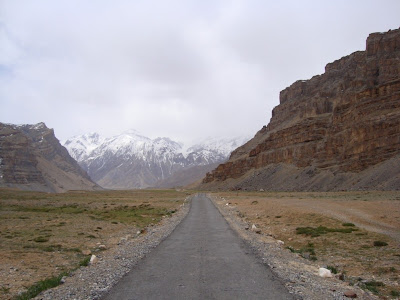 We decided to buy some woolens from Losar, last village in Spiti from this side and our stop for lunch. Reached Losar at around 12 mid day and by now had seen snow on the road atleast twice. We thought we would freeze at Kunzam, its over 600 m taller than Rohtang. Bought a woolen muffler each from Losar and had lunch of Rajma rice. Got our bikes entered in the police checkpost registered for the 3rd time in the trip. Bought some more stuff for the night and continued. 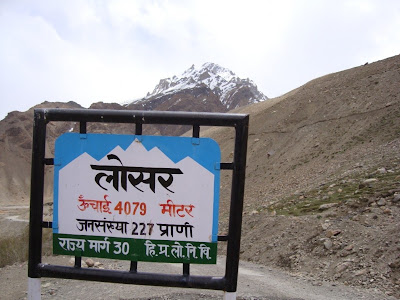 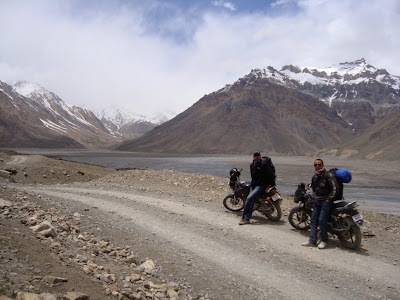 From Losar to Kunzam Pass

The road from here on is unmettled, but okay to ride, Kunzam about 19 km from Losar was reached in less than an hour. It was bright and sunny at the top, very less snow and beautiful. The part of the itinerary we were so scared off, was done with effortless comfort. 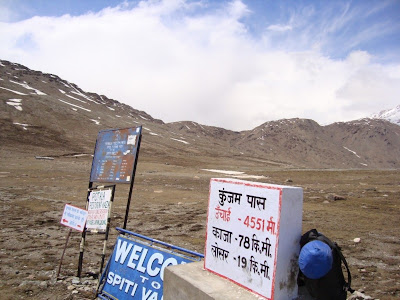 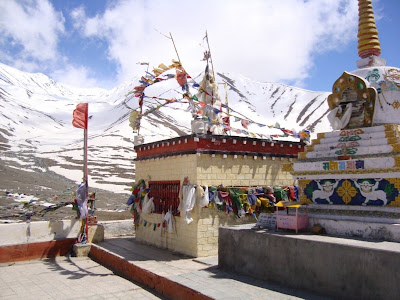 Temple at the summit

Everything seemed to fall in place, we took the customary round of the Kunzam Devi temple on the summit on our bikes and then continued downhill towards the road that branches off to Chandratal. After coming down a few Kilometers I saw the road branching off, we hit it. Though not a smooth ride, it was ok, till things started to get bad, there was a landslide on the way and hence we had to park our bikes and continue on foot. 10 meters of landslide screwed us for 8 long kilometers. We walked and walked, the weather by now had taken an unexpected turn for the worse. I could see some snow flakes on my black colored warmer. 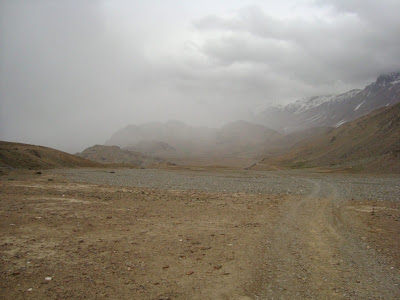 By the time we reached Chandratal, the light snow shower had turned into a full-fledged blizzard. We found it extremely hard to install our tent in the on going snowstorm. Somehow we managed it and by that time everything including our bags were fully wet. We realized that we could not survive the night here in this snowstorm and extreme cold with just a tent and 2 thin sleeping bags. After about an hour or so when it became dark outside and the snow still continued in full flow, we started regretting the decision to continue on foot to this place. We were trapped, we surely could not survive here nor can we go back, the bikes were 8 kms away. Visibility outside was negligible. By the time I almost lost hope and was praying for a miracle that seemed very improbable, we heard someone whistling outside. Luckily this time we were not the only ones staying here. It was a guy from the DMAS (Directorate of Mountaineering & Allied Sports) in Manali, who were taking a trek to Baralacha, we found that they had camped right next to us. We were saved. The guy helped us with our tent and we had piping hot coffee in their mess tent. The guys were so reassuring they made us almost forget the fact that if it was not for them, we could have just frozen by morning. They guided us to, surprise surprise, a makeshift dhaba that comes up in Chandratal every June till September. The Dhaba wala was very friendly and very helpful, we sat in his tent for couple of hours, shared stories of mountains and legends of the lake, over tea, Old Monk and chips. The guys there helped us with mattresses and blankets and we could not stop thanking them. Very important lessons learnt “Never trust the mountain weather” and “In the mountains, money doesn’t matter, people do”. 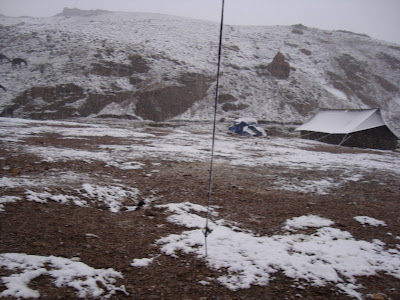 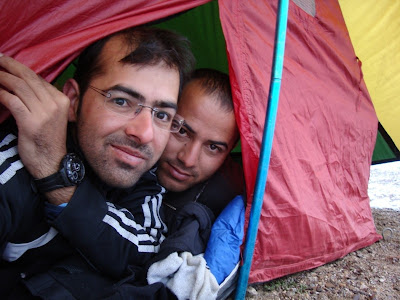