The World without OBL 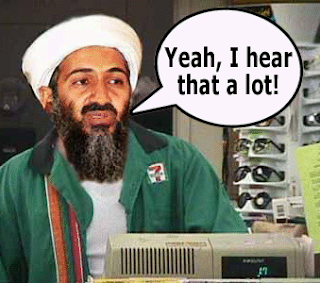 Oh, so they did it finally. And in a very Hollywood-ish manner. Choppers fly into a compound carrying the elite Navy Seals team 6, a swift 40 minutes raid and end of Osama Bin Laden. What??? Thats it??? No more of Osama from now on???
These are real voices in my head, having lived in an age which was largely defined by 9/11 and Al-qaida, these are very relevant questions.
I have rather already started missing him (not that he didnt deserve to die, he did, rather much earlier).
But OBL has left a huge void in this world obsessed with Good Vs Evil stories. No, the world has not become a safer place after he is gone, not by any stretch of imagination nor we would see any leniency in Airport checks (thats what we really care about). Rather the World is now without a face it so loved to hate. Now, all we are left with is a World which is as dangerous for normal people as it was with Osama still alive, but no one to curse for it.

Osama was that respite, he was the favorite punching bag for dont know how many people. Whatever was going wrong in the world could have been blamed on him without much noise.

On a personal level, I have spent a hell lot of time reading Spy thrillers and intelligence non-fiction to suddenly realise that the Holy Grail for spies around the planet has been found and killed.

May be they should have caught him and kept it to themselves, may be this way they could have still legitimized a couple more wars.

And for less mortals like us, we could have still lived in fear and awe (as we do now) but someone to curse for it.

Now waiting for someone in the fashion industry to come out with OBL t-shirts like the ones featuring Che Guevara and Nazi Swastika.