I ride daily in a F1 Car. For all you F1 fans, yes its exactly the way it seems on TV, cars zooming past each other, then another driver trying to show a deadly maneuver on a tight curve and yes the adrenaline is there too.
In delhi though they are not allowed to be in varying colors, they usually are in white with a yellow number plate. 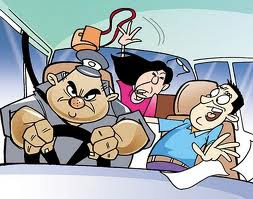 A cab picks me up from home daily for office and back, only yesterday my cabby pulled a maneuver off, which we only get to see in formula 1 chicanes. On a tight corner he saw a car that had passed him a couple of kilometers ago (and he was still holding the grudge), he almost instantly made up his mind to show that guy some of his skills, as the other car was about to go into the corner, he sped from the direction of the corner between the other car and the divider and almost forced the other guy to brake abruptly, took the lead and was now race leader.2-3 screams and chosen hindi pleasantries later he hit the straight road. still eyes firmly on the rear view to check if the other guy is planning a revenge. I just survived a mini heart attack.

Delhi is a great city, with roads which are in top notch condition for almost 10 months in an year, its a drivers delight. Why I do not compare it with drag racing?? Simple, if you are driving all day in bumper to bumper traffic, its not easy to speed. Here skill is the real winner, how you piss off 5 other drivers and take the lead is what counts.

On one particular occasion while driving on a single road with no divider, two F1 cars coming from different direction came so fast at each other and my cabbie braked so hard 0.0002 seconds away from collision that i was thrown to the front of the car by impact. On giving a nasty inquisitive look to the cabbie and expecting a 'Sorry Sir', I was rather told that its the other drivers fault as he apparently was at 140 Kmph compared to my cabby's 137 kmph. I instantly tendered an apology.

If you have been driven around Delhi roads in some of these white colored formula 1 cars, you cant have missed the last nano-second brakes, coming at 80 kmph and suddenly braking 0.001 meter away from the front vehicle, incessent honking, choicest hindi gaalis for the driver who does not oblige by clearing the way for your cab and also stoping the car in the middle of the e-way because the cabby's 'Bua' just called to check if he has gained some weight or not.

I suspect that Delhi has just one school from which these guys graduate in their driving degrees. Because everyone seems to have the same skills, same language and similar hate for anyone who tries to pass them.

The only difference from F1 here is that unlike the F1 cars which are high maintainance and need some work and service every 10-20 laps, these cars are service free, the recent one I sat in, was last serviced in 2007 and was still in top-notch condition (the fact that i had to assist the driver in changing gears and also had to push the cab once, are a different story all together)

All in all, I no longer watch the boring F1 races on sundays or go about wishing in front of my friends as to 'How cool it would be to riding those cars', I believe in taking matter in my own hands. 4 years and a dozens on 'oh f#@k, i am gonna get killed just now' moments later, Formula 1 has lost its charm.
Posted by Unknown at 12:45 PM