I think it was an year or two ago when I stopped making concrete plans, from smaller like travel to slightly more important like career. I am yet to regret it.
A little less than a month before I was supposed to go, it became clear that I am going to skip the entire Australian winters and swap them out for nice European summer. I would have happily spent 3 month planning this trip but only had about 3 weeks till departure. Well, everything fell into its place and now I am in Warsaw with family for a 3 month gig on a totally different team and setup.  This is one of those hidden wonderful things about Google, as soon as someone starts to plateau in their current role and needs motivation and a chance to re-activate some dormant parts of the brain, he/she could go on a rotation and learn completely new things and come back refreshed and recharged (throw a summer in Europe in this mix and things become more interesting).

Warsaw is not the kind of town which comes to ones mind when they think about Europe, honestly. London, Paris and Rome are more like it. But, Warsaw is amazing. It is this unique melting pot of east and west. This city was almost completely leveled in WW2. And, then came the Russians. Sometimes I have this pet research project I want to do, to find out if Stalin was in any way influenced by Alexander the great. He had an almost maniacal obsession with building a Soviet legacy in lands as far away as Cuba. Poland and other Eastern European countries were anyways his backyard. So, yes Warsaw, after the Russians were ousted in 1989 started to reinvent itself like the rest of Europe. One can still see the some parts of the city at this inflection point, where old Soviet style housing is giving way to glitzy glass corporate towers. 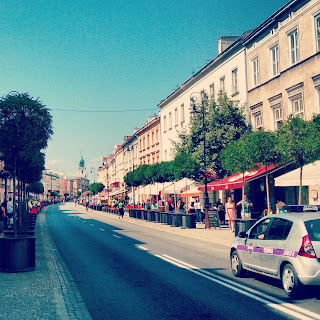 Since, its the first time we are in Europe and would spend at least a fourth of an year here, we were surprised by how different it is to what was in our mind. To start with, its damn beautiful, the street cafe scene is like none other and people really seem to love summers. We are put up in a nice apartment in the center of Warsaw and we are loving it.
Here are my initial observation about Poland in general and Warsaw in particular:

1) Language :( For 3 days after we landed here, we had a hard time figuring out, what was going on. While asking for direction I had to stop and annoy 10 people on the street before running into someone who could say 'yes' or 'no'. Not many people speak English. It obviously is not the case in offices or other business but if you want to navigate around the city, you could only rely on your instinct (and/or google translate). All street signs, shop signs, labels, wrappers and advertisements are in Polish. The only english street sign I found was the one which said 'Road closed for Metro Construction'. Thanks, very helpful. At least 3 people at the supermarket took me to the toothpaste section when I asked for 'pasta' (only to find out later that pasta is 'makaron' in Polish).

2) I have seen many cities but none so homogeneously caucasian. Even in Delhi, one can find many different ethnicities. Sydney is superbly multicultural. Warsaw is the most ethnically and racially (even linguistically) homogeneous capital city I have seen. Three of us often stand out in a crowd very obviously.

3) 'Stare Miastos' or Old towns are beautiful. Almost all cities in central Europe have them, small or big. They are quite unlike the image of an 'old town' that forms in the mind of most Indians. These stare miastos are actually the heart of the city and something people are very proud of.  Cobbled streets, old colorful houses, old trams and vintage charm is everywhere to be seen.

4) Summers. The only time (i have been told) one should even think of visiting Europe. And, rightly so. Though, I am not going to comment on winters and just how horrible they might be in these temperate lands, I'll definitely comment on summers and how beautiful they are here. The whole vibe of the city is of a big carnival, People seem to enjoy being out and in the warm sun. Streets are full of people till late and it helps and it only starts to look like evening by about 9:30 in the night and is pretty sunny till 8PM. Its beautiful flowers everywhere, which I think a lot of other cities in the world should learn from Europe. People bike, skate and just tend to linger on the street side cafes and restaurants.

So there, loving it here now. A lot of travel is scheduled for the coming 3 months. Some official, to places like Ljubljana (who would have thought) and some to more touristy, like Paris and Prague.
Will keep updating here as and when I find time. Looking forward to the summer.