The golden city of a hundred spires - Prague 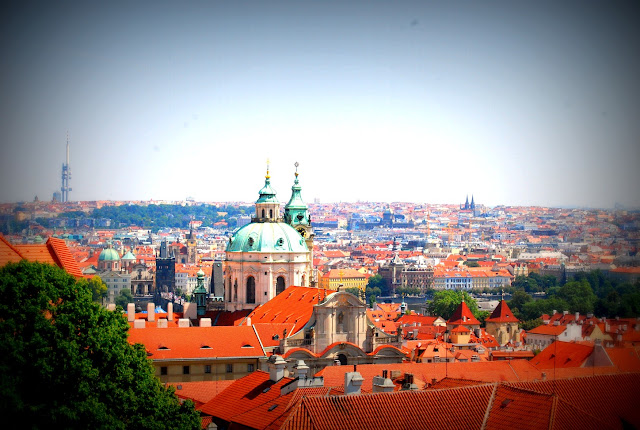 It might have been not more than 10-15 years since I first heard of Prague. It was a pretty unknown capital in the nineties, at least for people not from Europe. Capital of Czechoslovakia till 1990, no one would have dreamt of traveling to Prague because it was eastern bloc. The only reason we would ever quote Czechoslovakia during school was to check the other person's knowledge of its twisted spellings.
But something happened after the iron curtain came down in the nineties and much like other cities of far more repute like Berlin, Prague reinvented itself as a destination of the alternative arts movement. All kinds of grunge artists, musicians, painters and writers started flocking to the city, which even the great (though a little eccentric) Franz Kafka called home. The whole metamorphosis of the city in this manner has been a tourism boon and Prague is suddenly on many travel buckets lists for people from all over the world.
So, what were we expecting to find in the ancient capital of 'Bohemia'? Well, honestly a lot of heritage buildings, cobbled stone streets and hmmm,,,thats about it. We were a little skeptical because the over hyping of Krakow which everyone seemed to have done for us. Krakow was good, though a little dilapidated and crumbling. I guess maybe we missed the whole point of being in Krakow. But, to be honest it was just okay. The only highlight in Krakow was the Oscar Schindler factory and museum.
Hence Prague was being planned with a high level of probability for a 'meh' kind of a reaction.
We reached late in the evening and it was surprisingly warm. People with kids would attest and understand that if your kid behaves well during a flight and does not create embarrassing moments for you, your trip is half successful anyways. So, reaching Prague was good and we were looking forward to the next day of exploring the city.
Susan Miller was correct, next day was a mini disaster. Sort of a day when you just want to go home and not even look outside the window. Prague was in the middle of a massive heatwave. It was 40 degrees there that day, totally not my idea of a place in Europe, absolutely not my idea of a day walking around the streets in hot, scorching sun. This reaction comes as a shocker to many, being Indians and also being exposed to the nastiness of the Australian sun people assume that 40 degrees might be a piece of cake for us. But, let me correct you, in India no one willingly ventures out in open sun say in June to 'enjoy' themselves. These kind of leisurely activities are parked till autumn or early spring. And, Australia thankfully has a wonderful cartel between sun and rain, so the day it touches a certain temperature in summer, rest assured you'll get some welcome showers in the night. So, being out in Prague that day trying to squint (to basically cut the amount of light entering and hence hurting your retinas) and look at all the gothic architectural marvels was excruciating. Oh, all this while we were taking turns in pushing a stroller with a kid and the poor guy looked tired and red like a slightly wilted tomato in all that heat. We had simply picked the wrong weekend to be here.
So, after a quick stroll around the old town square (totally not enjoying it) we decided to just go back to the hotel and chill. Who remembers that sinking feeling one gets after spending the money and then realizing it just went down the toilet? I do, I do.
But things have a way of working out, just when you decide to just screw it. We went for a boat ride on the Vltava river in the evening and although still hot, that was a good experience. We got another chance to see and thus appreciate the wealth of beauty that this city has. Prague has been a capital for most of the last 1200 or so years. At least a couple of Roman Emperors were based here and hence it was once a capital of the holy roman empire, followed by the Habsburg monarchy and their Austro-Hungarian empire. After the world war it became the capital of Czechoslovakia and we know the rest. But, since the city was around during the Romanesque period through to the Gothic and then the Renaissance, it has an imprint of all those periods on it. A good 70% of the building would still confirm to a more Gothic style of architecture though. A lot of famous landmarks, like the very well known Charles Bridge are named after, well Charles or Emperor Charles IV, whose reign was probably the golden era in Prague's history.
The most amazing thing that strikes you while in Prague is the fact that there are streets and corners and building in the city which haven't changed fot the last 700 years. This city basically escaped WW2 untouched. Every corner of the city, believe me every corner has something to prove it. There are statues of Gods, sometimes just the busts and sometimes in full glory (read naked glory), which were amazing examples of workmanship. Possibly in every form of medieval architectural design style you know of, from gothic to baroque to renaissance. We saw the astronomical clock which has various urban legends around it, people still trying to figure out the hidden cryptic meanings of all the marking on it. The strange yet enormously beautiful chimes and trumpet sequence that the clock plays at top of every hour is a must watch. With elves and various figures coming out of small windows signifying a life and death philosophy. Tyn church is just across the big town center courtyard. The most original example of a gothic building you'll find anywhere, just beautiful. 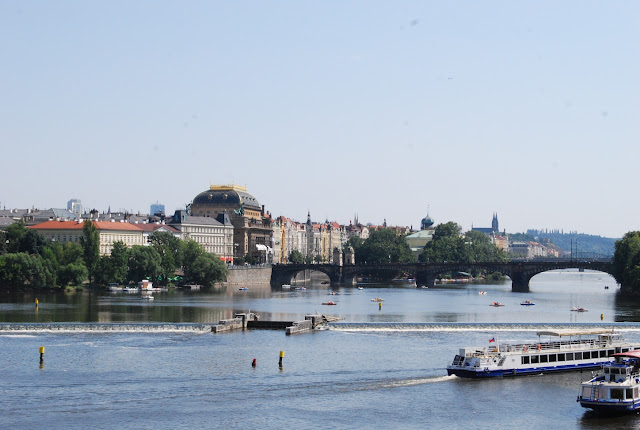 Next day was reserved for the beautiful Prague castle or 'prazsky hrad'. This is one landmark which stands out in the whole city. Visible from everywhere, the castle is build on a hill. We took a tram which travelled uphill to one of the side entrances of the castle. You walk-in leisurely and as you take the first turn your eyes are greeted by something out of this world - Rising, as if from the pointed canopy of the trees, in front of the Prague castle is the cathedral of St Vitus, designed and commissioned in the 14th century by Charles IV, the then king of Bohemia and soon to be the Holy Roman Emperor. It is hands down the most beautiful building I have ever seen in my life. It is something that dwarfs everything around it. Superb Gothic architecture and design and big scale beautiful construction. We went in and were amazed equally by the interior, the ornate stained glass windows and the unbelievably high ceiling. Breathtaking. Couldn't get enough of it. Strolled the various courtyards of the castle and also various side streets and alleys around it. This castle is also home to the President of Czech republic so had a wing which was pretty modern compared to majority of the structure. 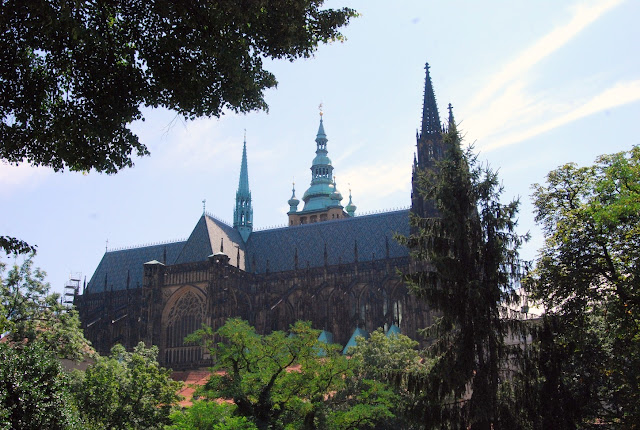 Then we did, the opposite of what we had planned to do day before. We walked down the narrow yet very very beautiful street that leads to the rest of Prague through Charles bridge. It was an experience in itself. Almost pristinely medieval, this street is a must walk while in town. Small boutiques selling handicrafts and souvenirs, Kafka-esque art with existential theme and beautiful paintings of various parts if the town.
Also feeling hungry since it was past lunch time, we were essentially looking for an Italian place to eat (the fact that you can always find some pizza and a couple of different pastas, this cuisine is godsend for vegetarians). But, surprise surprise, we saw 'Gopal vegetariansky restaurace'. This place was unique and superb, run by a Czech guy along with his wife. This guy is a ISKON follower, down to the last detail with a 'choti' and a 'hare krishna' kurta. Soft spoken almost to a fault, he welcomed us with folded hands, which even people in India have stopped doing. When asked for a menu he said, he has a set menu, a thali in a typical ISKON style with sabzi, daal, chawal and sweet. There comes a time while traveling when you are so sick and tired of eating out and that you just want something simple like daal chawal to eat. We were going through that time and Gopal was the perfect antidote. Simple comfort food is one of the most underrated great things in the world. We thanked him profusely for the amazing lunch (with folded hands, of course). Walked further down to the Charles bridge through the busy street with cafes and little boutiques selling all sorts of things. Facades which haven't changed in centuries and restaurant which have been around for decades if not more. Charles Bridge or 'karluv most' is one of the most recognized landmarks of the city, studded with 30 statues in baroque style. A walk across it ranked pretty high in my travel to-do list not long ago. 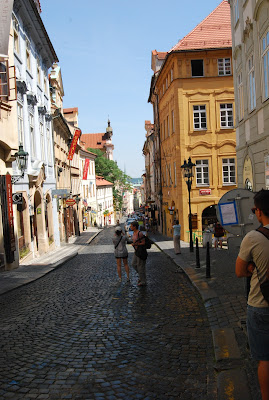 So, that was a superb end to our Prague trip after not-so-ideal start. Me and my wife both agree that Prague by far is the most beautiful city we have ever seen, there is a strange charm about this city which is different and unique. I have an inkling that Ljubljana or Paris might change our ranking of the most beautiful city a bit. A lot of travel coming up and I have some very interesting places in my itinerary.
This blog is going to be a busy place.