Mountain View is not the kind of town which could give the first time visitor any indication of its importance. Like many other small towns on the El Camino Real it has a old world charm and laidback persona.
But this little town has been the center piece of my imagination for a longtime now, only because Google Inc, the organizer of world's information is headquartered here. I used to form pictures of this town in my mind when I first heard that Google is HQ-ed here and they were of a Space age city with lots of fancy cars and super cool technology. I must say I was taken aback. The only indication that Google may be around here for any first time visitor is the ubiquitous 'GoogleWifi'.
I reached Moutain View near noon after a very annoying and tiring 13 hour flight with the worst service one could imagine and all I could think of was a hot shower and hot Indian food (though still imagining about the space age town).
Believe me Mountain View or MTV (as it is known inside Google) looked different and beautiful partly because of the un-hurried vibe but also because I saw an Indian restaurant right across the street from my Hotel. Waaah, my day is made, took a shower in record time and gorged on some south Indian delicacies.

Next day was big, figuratively speaking. Had been planning this day for many years, What is it like to be at the GooglePlex? Are all those Youtube videos true? What is to be at the heart of where it all started?
11th July 2011 answered most of these for me. Googlebus was there to pick us up in the morning and wow it had wi-fi. The campus is enormous and nothing like what used to play inside my head (space age, flying saucer like vehicles and robots all around). Rather its such a cool and leafy surrounding. Brick buildings housing different teams and google bikes like the ones in the Pic below for transportation. I was sold yet again, isn't one of the reasons why we love Google is that its so simple and friendly? These google bikes made me love the place a bit more (would have been a different feeling if there were cars or buses). Our training was happening in a building that was a little removed from the real 'Plex', so the first lunch time cycle ride to famed 'Charlie's Cafe' was the real thing. I wanted to see everything and also take a pic of everything like a 5 year old in Disney Land for the first time. A dedicated Indian 'Namaste Cafe' didn't disappoint a bit either. 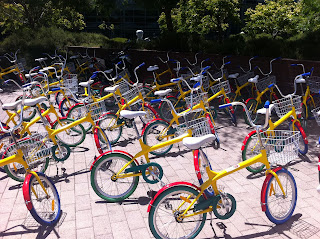 Took numerous trips around the campus on the lovely cycles in the after hours to see all the landmarks at Google. From 'Stan the dinosaur' to Space Ship One and the Giant Android to the Google Store. I loved the vibe of the campus, everyone is friendly and helpful and you run frequently into guys who look exactly like the ones who come to your mind when you think about words like 'nerd', 'engineer', 'geek' and 'hacker'. 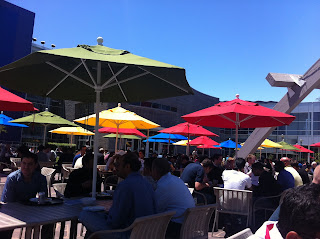 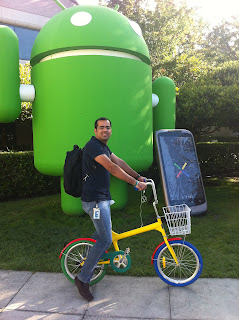 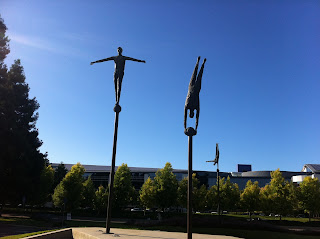 One of the evening social events that was on schedule was a 'Bowling Social'. I had thought we would be put in the Googlebus and transported to some Downtown bowling alley in MTV or Palo Alto. On the evening of the event we were rather asked to take the cycles and go to another building. Whatt????? Google has an on-campus bowling alley aswell?? yeahh, it does and how cool is that. I would have totally made that place my 'Adda' if I was working in MTV. The Bowling Social without doubt was fun with the team from Dublin beating the shit out of everyone.

Didn't realize it was almost a week since I had come to MTV, last day here was a friday. Another big day figuratively speaking. I had been imagining this day as well, for sometime now. Why? because friday at Google means TGIF. Yes, the weekly event where no matter how big or small you are in the company, its your chance to be in front of the Big shots and ask questions. I went there early and took the TGIF equivalent of a Balcony seat. It was 5 PM and who did I see walk past right next to me, yes Sergey Brin and Larry Page. Whoa, disbelief (the celeb gazer that I am). Larry was quite 'dressed up' which in Google terminology means wearing a jeans and a polo. But the interesting part was Sergey Brin, in shorts, a sweaty t-shirt and socks, yes you read it right, socks no shoes. Whoaa..whats happening?? Aren't these guys the founders of one of the most recognized companies and oft-used web service in the world? worth $38 billion each? And where are the airs and the Charisma? Well, there is none. Engineers at heart these guys are the closest you can get to the Billionaires who behave like normal human beings. My respect for this company's culture of openness and coolness just went a notch up.

As I was walking out of the event to pack for my flight back to Sydney, I realized Google is not a company, its the 'zeitgeist'. Its the way people in my generation think and behave and express themselves. Google is tuned to that wave length, it knows why and what we are. And, I was here at Google, attended TGIF, heard Larry and Sergey standing right next to me crack self-deprecating jokes and ate at Charlie's Cafe. It had finally happened.

I went back to the hotel, packed and left for San Francisco International for the flight back to Sydney, proudly wearing a satisfying smile and my Google T-shirt.